“One of the ways that our faith expresses itself is by our ability to be still, to be present, and not to panic or lose perspective. God still does his best work in the most difficult of circumstances.”
— Tim Hansel

That seems easy enough-right?  If you said yes, I know you are not being truthful.  It’s HARD!  Those words above are like telling me to not eat that last bite of chocolate cake….I can talk a good game, but at the end of the day-that cake is gone.

We are at an update part in this Kill the Paps journey.

I had my end of cycle scan this past Wednesday.  (I also had the arrival of what could only be called an alien abduction of my throat-seriously…when I am in tears over throat pain-call the CDC-it can only be the plague.)  I digress.  Scan.  I’ve lost count on how many CT scans I have had over the past four years, but I still have to close my eyes as they move the table under the scanner.  There’s just something surreal in those moments as the scanner does it’s thing, the contrast makes its way into every crevice of your body-you have zero control over anything that occurs during the scan or after the scan. (See above quote.)  Something with such enormous implications, ends with a quick removal of an IV, and you then leave as if it was something as mundane as a routine lab draw.  The hands of the clock the next twenty-four hours move like molasses on a cold, winter day.  This was a big scan….it would determine whether we placed a port on Friday, whether I would move to cycle two….determine if I went to the OR for a debulking.

Thursday afternoon came, and I saw it pending in my portal, so I knew it was time to call for the answers to the above steps.  I’ll just park the results of the trachea portion of the scan right here. 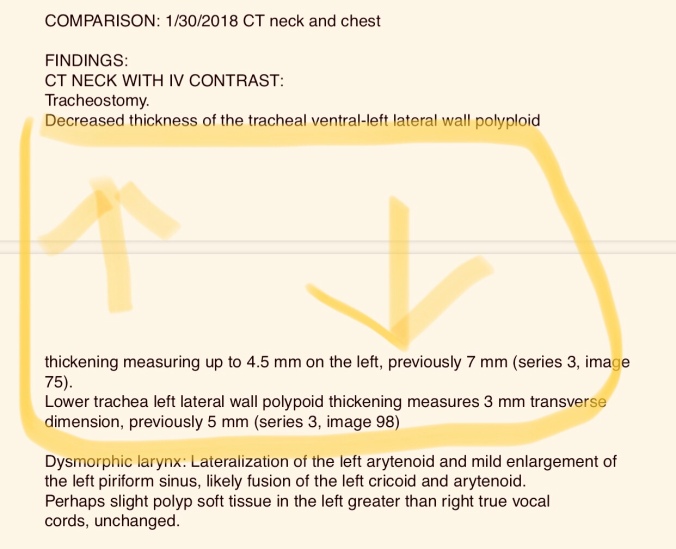 Yes-you are seeing that correctly.  In three doses, almost half of what the lesions were upon intake scan!  Pulmonary all stable-nothing new.  Larynx-nothing new (it was clear at intake).  A good report (minus learning there’s a dental issue to deal with that has given me zero indication it existed).  This meant-Friday was on.  Kim was getting a port.

(I have to say, that on Thursday, texting my Arkansas and Chicago friends with the update was probably just as awesome as the results….this is my tribe who has prayed over me for this entire journey…..invested in this walk. Shared my sorrow when the clinical trial failed, when the disease was just unrelenting. Offered words of experience/wisdom/support with each decision that I have made along the way-including the port.)

So, now to the port.  I wasn’t nervous-I was more than ready………until…..wait…this seems to be a tad bigger deal than I had it in my head.  I almost put the shoes back on during education training.  Let’s say that seeing it up close and personal….it was the size of a python…ok, maybe not, but it was deeper than I anticipated it being.  PS-I did not need to have training on the catheter/needle used to access port….I could have remained blissfully unaware and been totally ok with that…there’s a reason I don’t look at IV upon entry.  Some things are better left unseen.

Can I just tell you that every nurse I have interacted within the Emory system has been excellent!  Seriously, I told my spouse that I honestly felt they were as good if not better than my Mayo care.

Once all the boxes were checked, I was wheeled back into the frigid procedure room.  I had been told that I would be given conscious sedation and would not be aware of what was taking place, and would likely not remember any of the procedure.  I was ready for my drug induced nap.  Drugs given.  I’m looking around, unable to see much of anything due to being tented (PS-tent someone with a trach and our natural reflex thinks you are going to block our airway-hand goes up-I’m scolded…) Back to the drugs….nothing, nada, zilch…I get a booster….nothing, nada, zilch.  Insert mild panic on my part, realizing what was fixing to take place-I was going to be a major participant in todays procedure.  Neck is numbed.  Can I go now?  I think I’ll pass on the rest.  Then chest was numbed.  Seriously, I’m good..let’s call it a day.  I’ll spare you the detailed details, but let’s just say that I am certain Thor walked in with his hammer and snapped things into place.  The cardiologist was wiping my tears. Why didn’t they give me more meds?  Avastin has this little side effect where it can raise your blood pressure-and mine was running 152/90 on this day and at this point it was just best to keep going.  Soon, it was done and with no drowsiness, no complications, I was free to go in about thirty minutes.

The past forty-eight hours have been uncomfortable, but I still know this was a good decision-even if I wanted to jog my way out of Emory on Friday after education and during the procedure.

I was able to enjoy church this morning and was able to get out for a bit yesterday to enjoy the beautiful weekend here in the peach state.

This week, I begin cycle two.  My goal this cycle is to see a trachea with zero growths after the next three infusions, no new growths and the beginning of shrinkage of my pulmonary nodules.

Today, I celebrate a wonderful scan report, a complication free port insertion (minus my full participation) and I celebrate those who have held my hand this entire journey.  Someone was talking about my being brave…and I’m really not…not by myself anyways.  I’m brave because of those who walk alongside me. I’m brave because I refuse to accept any outcome that doesn’t end with a clear scan down the road.  Is it this drug?  I don’t know.  I just know it’s coming.  I hope it’s here on this earth, but it could be when I have my wings…either way….I know it’s coming.  I do wish my Mom was here for this.  I wish I could have told her that the papilloma are on the losing side of this battle.

So, peace out, drink some coffee….stay out of the kiddos Easter baskets.

Plowing through Life in the Country...One Calf Nut at a Time

Faith Hope and Love, these three. In observations, reflections and encounters.

Stuff That Needs To Be Said

A lot from Lydia

Art and Lifestyle by Brandon Knoll

A chronic illness life is a crazy life. We can handle it together- with humor, kindness, and a few meltdowns along the way. Peace, love, and health.

Author of THE PAST IS NEVER and THREE RIVERS

Student of Life. Advocate for serious joy in Christ.

WONDEROAK
The Journey of My Left Foot (whilst remembering my son)

I have Malignant Melanoma, my son had Testicular Cancer

For women living with heart disease

Plowing through Life in the Country...One Calf Nut at a Time

Faith Hope and Love, these three. In observations, reflections and encounters.

Stuff That Needs To Be Said

A lot from Lydia

Art and Lifestyle by Brandon Knoll

A chronic illness life is a crazy life. We can handle it together- with humor, kindness, and a few meltdowns along the way. Peace, love, and health.

Author of THE PAST IS NEVER and THREE RIVERS

Student of Life. Advocate for serious joy in Christ.

WONDEROAK
The Journey of My Left Foot (whilst remembering my son)

I have Malignant Melanoma, my son had Testicular Cancer

For women living with heart disease